Third Council (Part Three) – Zayed And The Concept of Happiness 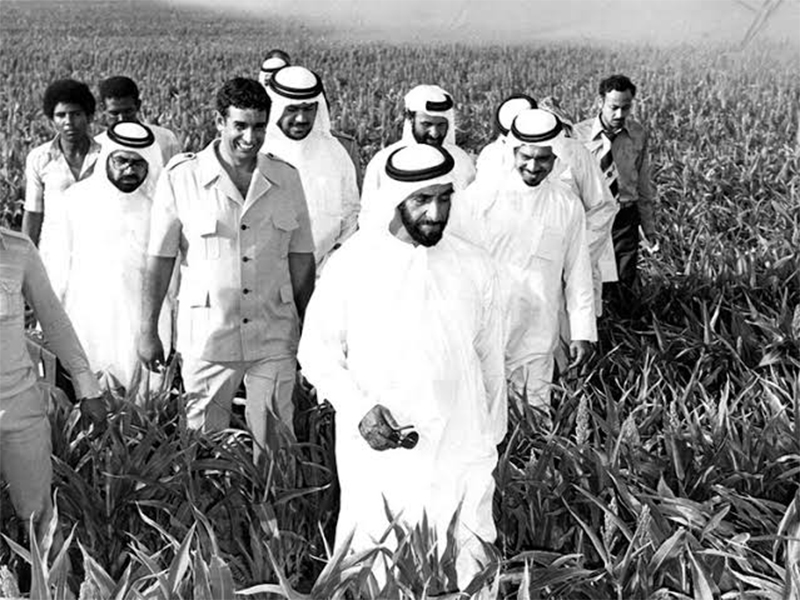 The establishing leader, Sheikh Zayed _ God bless his soul _ had not left his people out of that interest, he involved them by distributing reclaimed agricultural land among them so that they would participate in planting it, as the farm areas reached almost to 879 thousand and 234 acers in 1997 all through his supervision and guidance, distributed on about 22930 farms, he had also faced the lack of water resources problem by slotting water channels, digging up wells and establishing water desalination projects.

Alongside with involving them in agriculture, he used to support citizens and compensate them with farms to gain from and to spread farms in the Emirates.

In the light of this topic, I find myself reminded with a story I was told by one of the citizens, it had happened during Sheikh Zayed's council, the number of attendance was small and dates were brought to Sheikh Zayed so he told the man to eat it, the man was very pleased until Sheikh Zayed asked him “Does your farm produce such?” the man felt too embarrassed to answer so Sheikh Zayed repeated his question twice and when he found the man still unable to give any response he asked “Do you have a farm?”, the man then answered wearily “No, your highness, I do not”, Sheikh Zayed asked “And your siblings, do they own farms?”, the man's answer was again “No”, upon hearing that, Sheikh Zayed ordered for five farms to be prepared for the man, his father and his siblings, the man had mentioned that his entire colony had farms but his family and he was too shy to ask Sheikh Zayed for farms, and the farms his family was granted were much better prepared than the farms of all his colony.

In the field of caring for farms and trees, Abu Dhabi Fund and Sheikh Zayed Foundation had never faltered when in came to helping a great number of countries which suffer from tree cutting outbreak, Sheikh Zayed also found a partial solution on the local field, saying “We do not want to work on preserving the currently existing tree only, we desire to plant many others by its side”

And to put his words into action, he ordered as many trees to be planted as possible in wide patches around the country, as well as his dedication in agricultural land reclamation to establish thousand of new farms where had had focused on the necessity of planting as many trees as possible, he had also insisted on surrounding road sides with green trees, along with establishing public parks and green pastures all around Emirates, as well as planting trees and desert plants that usually grow in coast land with salted soil for thousands of square kilometers.

We may say that it would be impossible for any person or authority to state a number, even if approximation, to the trees Sheikh Zayed  _ May his soul be blessed _ had spread everywhere in the lands of the and outside its borders, although some approximations indicate the number to be somewhere between 100 million and 150 million trees, all due to Sheikh Zayed's belief that trees are no less important to infrastructure than buildings and roads.

As his wise policy in the field of environment,  United Arab Emirates gained many appreciation certificates and awards, as it had been chosen to be the headquarters of The General Secretarial of The Coordinating Body of The International Nature Reservation Fund to The Protection of Arabian Oryx, as well as being chosen as a president of Sea Turtles Conservancy In The Wast of The Indian Ocean, which is part of The International Nature Reservation Union in 2000, as an appreciation to its leading role in protecting all extinction threatened turtles species. As well as The International Sustainable Development Summit, held in Johannesburg, South Africa in September 2002, adoption to The Abu Dahbi International Environmental Data Initiative, aimed at enhancing the cooperation between advanced an developed in the fields of environmental data

Through this we notice how Sheikh Zayed was almost like rain, bringing good to wherever it fell, and wherever he sat foot, he brought good and blessings to the land, never taking any of the preparation that were made for him in these lands back home, which indicates his deep philosophy in planning to build each area through his visits, he did not want the preparations just to enjoy the visit he wanted wells to bu dug and roads to be built in the area and all needed facilities to be established there, choosing the title and cause of that to happen to be his visit for the work to be done at its finest, with him supervising it.

Take a look and admire that kind of generosity, attention and care that Sheikh Zayed had, which truly were infinite and unchallenged, indicating how he had been raising a generation on the manners of generosity, cooperation and care for the environment

Based on this council, International Tawasol Tent established the idea of a program named “Green Arms Program” which was adopted to spread the culture of environment, and in this field held “Zayed and The Environment” demonstration in collaboration with the ministry of Environment and Environment Association, hosting scientists and and lecturers for the topic, gaining a chair in meetings, symposiums and conferences, locally, nationally and internationally, in the field of environment, having several representatives in many places around the world, and with that making a great progress in the field, and our book “Communication Man's Vision to Bring Happiness To National Leaders And People” focused on the tires of International Tawasol Tent's focus on the environment, the aspects and activities it has established in this matter.

in The Strategic Studies Center, and from this program a company we named “ Green Arms Gate” was born.