Third Council (Part One) – Zayed and The Concept of Happiness 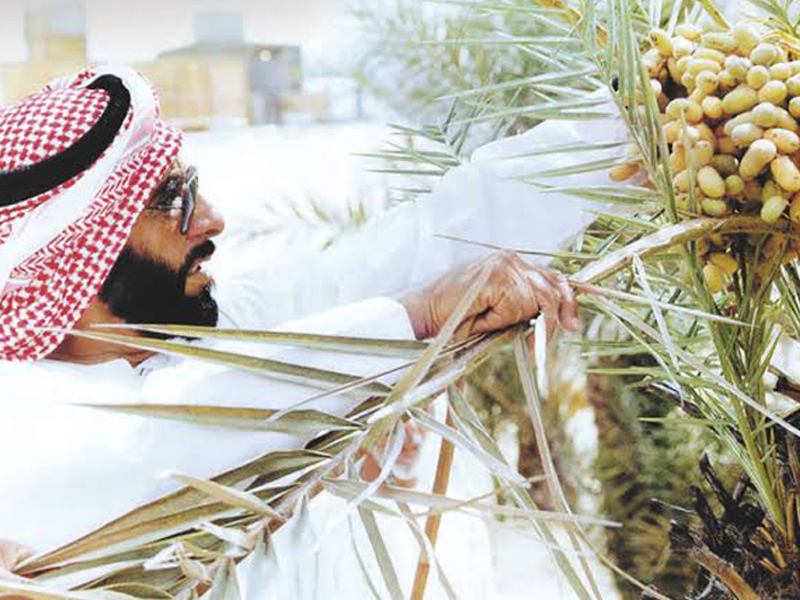 Sheikh Zayed had a summer council and a winter council, in winter council, for example, he _ God bless his soul_ used to travel to each emirate to meet his people there, staying for a certain period in each to discuss their matters, especially in the field of livestock, and more specifically, canoes, as in during these visits, the main festival of camel race were held to liven the spirit of his people through this council, he could always be seen rewarding winners with the colonies surrounding him in a marvelous celebration.

We may say that Sheikh Zayed_ God bless his soul_ is the only ruler who cared about livestock, enough to create a card for each citizen in which he writes the number of cattle he owns to be recorded and to regulate the Emirates livestock, assigning yearly or every six months encouragement and motivational funds for the owners of these cards as a governmental support, and that was what made Emirates in a state of over 50% livestock self-sufficiency, all thanks to God first and the great efforts of Sheikh Zayed _ may his soul be blessed_.

Sheikh Zayed had not only seen to his people by giving them numbered farms, he also gave them what is known as ‘Homestead’, and each homestead had a number, observed by a yearly committee to check the number of cattle on it and see for its support salary.

Some of the Arab residences understood this field, found themselves comfortable with and became familiar it more than others due to their nomadic nature, and for that homesteads formed a model for what they have in their countries.

In this council, gifts were presented to Sheikh Zayed from the residents of each area, to please him and as a token of appreciation for his efforts, and in return he presented them with valuable gifts to encourage and motivate them to keep up with their activities and get to know them even closely.

One of the stories I am reminded of in this topic happened while Sheikh Zayed _God bless his soul_ was in his camp near to the his people, the residents of Mazeed, near Al-Ein, close to where we live, and because the residents are always happy to welcome their father, my father wanted present him with a milch camel while he was near our area, so he took the camel to him intending to give him from its milk, yet its udder did not bring milk, Sheikh Zayed then said “Maybe it is afraid or was envied” and ordered him to keep it out of sight for a short while the come back with it, he did as he was told, after coming back he tried to milk it again, milk flowed generously and Sheikh Zayed drank with pleasure,

That was a great example on the man’s simplicity with his people, as he enjoyed exchanging gifts with them, looked after their cattle and how his people had always loved to please him in any way possible, you see a man bringing his sheep to be slaughtered for meat and another bringing camels for their milk, while he himself was being generous with them, lavishing them with valuable presents, as seen in this true story that was told to me by my father, which was not really far in time, it happened in the early 80s.

As for the Summer Council, Sheikh Zayed used to gather with his people whom are interested in agriculture, especially that of palm trees, where they came to the council carrying dates, and in the council, types of palm trees were identified, the areas that need more water, the areas where planting palm trees need more attention and recognize the obstacles and the shortfalls in this field so he can accomplish their needs.

In this field, Sheikh Zayed had assigned a farm for each citizen with a family to support near their house, to encourage, fill the need and please his people.

With that we see how Sheikh Zayed _ God bless his soul_ had seen for the environment to the point that many books were written in this regard, for example “ Zayed And The Environment”, his history with environment and caring for it was not a momentary thing, nor was it a mannered behavior intended to improve his image or in a political program, it goes back to his journey from the citadel in Al-Ein to the palace in Abu Dhabi where he gained great experience to face the great challenge that had always faced him, that is maintaining the balance between man and nature, not to gain himself any social benefit but for his recognition of the importance of this balance through the life he had lived.

Sheikh Zayed _ God bless his soul_ believed that if the water was wasted, the lands went dry and the seasons were no more then people will be facing certain death, and maybe what made him special among all those who claim themselves protectors of nature was his deep belief in what may be referred as the sanctity of nature, as the author Graeme H. Wilson had pointed out in his book ‘ Zayed, A Man Who Built A Nation’, and what had anchored his environmental believes was that protecting it and maintain it was not impossible, and he had never believed in the Imperative of Desertification nor its perpetuity.

There are many stories that tell about Sheikh Zayed’s attachment to nature and especially, trees, as he had a special familiarity with trees, when he left his home in Al-Ein and moved to Abu Dhabi in 1966, the movement did not separate him from his roots, and his personal suite on the first floor of the Sea Palace had a garden view, seen through a wide window that was more like an open balcony, in this garden Sheikh Zayed had planted several kinds of his most loved trees such as palm trees, almond trees, mango trees and lemon trees, which were the trees Emirates people used to plant around their houses long time ago, and he felt comfortable seeing it, more than that, a situation was mentioned in the book ‘ Zayed, A Man Who Built A Nation’ when Sheikh Zayed _ God bless his soul_ was in his car with one of the country’s guests when he saw a big, lush tress, leaning to the point it was about to fall, so he stopped the car to the guest’s surprise and called the people in charge back in the palace through the car telephone ordering them to sent someone to look after the tree and fix it back to the ground to ensure it’s safety and long lasting life.

Also, during a check-up tour to Al-Ein development projects and in a project concerning building new routes, Sheikh Zayed noticed one of the oldest Al-Ein trees standing in the way of the to-be built route and knew it was planned to cut it down, so he called for a meeting with those in charge and ordered them to leave the tree standing in its place, and divide the rode into two routes around it, meeting behind it.