Second Council – Zayed and The Concept of Happiness 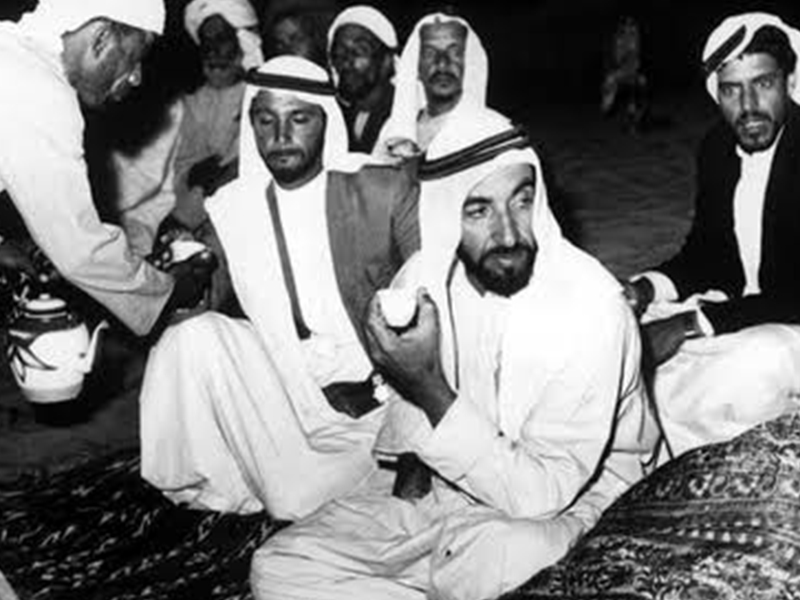 The Council of Arab’s judicious In Ramadan

In the earliest of Sheikh Zayed’s presidency _God bless his soul_ he used to hand out Ramada preparation supplies to his people and supervise this process himself, making sure that the preparations had reached every house and confirm the well-state of its residents, what helped him then on doing this unique, accurate act of generosity was the low population.

He _ May his generous soul be blessed_ was known for never keeping food, drink, clothing or habitation for himself without his people, more than that he had always been generous and munificent with them, especially in the blessed month of Ramadan.

He_ God bless his soul_ used to meet the country guests of scientists and so on from all around the world, especially in Ramadan, gathering with them and listen to their opinions and suggestions in regard to Muslims matters, listening to what is new in their countries and how these important ideas might benefit the country United Arab Emirates and other Islamic countries.

He, also enjoined them to look after his people in hopes of strengthening the rows of the Arab Islamic countries, aiming at creating a sense of brotherhood, cooperation and compacting their lines, all in service of planting the magnanimous principles and the values of forbearance within the spirits of the Emirates people, encouraging of peaceful co-existence with others and heeding them from strictness, as well as enjoining them to the necessity of committing to The Medial Advisory Opinion which serves their religion and life, facilitates religion matters to the people and saves them from uneasiness.

After knowing their specialties, opinions and cultures, The scientists and experts were then disrupted on a territorial basis, those who have a nomadic culture were sent to the nomads for that was more reasonable for the nomads to gain their attention and help them communicate, understand and benefit from those experts, on such basis he sent scientists and experts to different areas.

Then, before the end of Ramadan, on the last 10 days, Sheikh Zayed _God bless his soul_ would gather again with the scientists to listen to the questions they were asked by the people, in order to know the religious, cultural side, unite the concept in the advisory opinion, understanding how the endowments are working, how his facilities are keeping up with the religious culture and how to benefit from the lessons of that season in the upcoming

In the end, those guests were generously honored with valuable gifts as a token of the appreciation he had for them.

And for Sheikh Zayed’s investment and interest in Ramadan, inviting and honoring scientists during its blessed days, Allah honored him back, as he met his death in the days of Ramadan, and the scientists whom he used to host and honor were the ones who held his funeral and prayed for his soul to rest in peace, which could only indicate the man’s integrity and dedication.

That was Sheikh Zayed’s methodology for each Ramadan, and these councils are still inhibited in each Ramadan until now, as the presidency was forwarded to his highness, Sheikh Khalifa bin Zayed_ God bless him_, who persisted on continuously organizing it, giving it great part of his attention and saving nothing in his power to maintain its success and continuity in the finest shape,

Then they were forwarded to the crown prince, his highness, sheikh Mohamed Bin Zayed _ God bless him_, who managed to run it and look after it with great dedication and care, as he has inherited his father Sheikh Zayed’s investment and care for this field, improving and developing it, and he is still on that dedication until this very day.